In this project, a microcontroller-based circuit controls an LED designed with a distributed (Xbox 360) user interface.

In this project, a microcontroller-based circuit controls an LED designed with a distributed (Xbox 360) user interface. 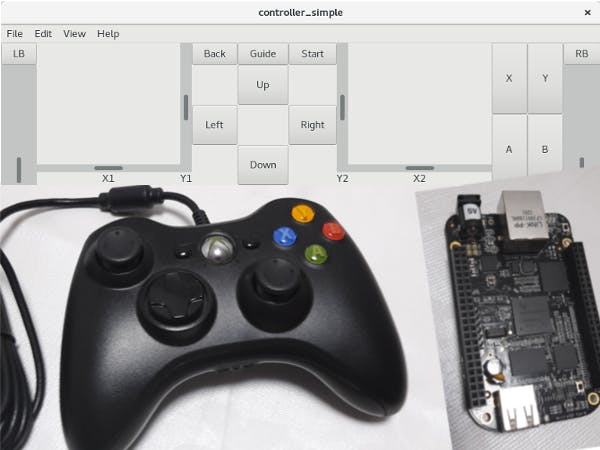 In the days of internet of things usability and mode of deployment of devices gets more and more in the focus of customers and their corresponding needs. On the one hand the operator of a machine sits safely in a control room whereas the actual device is supposed to be deployed at a different place. Application scenarios are unmanned aerial vehicles, e. g. flying in the air or diving in water, whose mission is conducted by an operator in a control centre.

An operator’s interface can be a control panel which integrates smoothly into the application and is accepted by the operator. Its handling should be simple and intuitive but still allow the operator complex manoeuvres while being tolerant towards faulty inputs.

A potential link between the user input and the actual application needs to be arbitrary so that different transmission mediums are usable and with this wide distances coverable.

Finally an operational device is located at the end of this chain. It receives control inputs and distributes this information to robots which actually execute tasks based on these data. Potential sensor information might be fed back into the transmission line and sent back to the operator.

Based on the use case described in chapter 1 I developed a concept for this contest.

For handling user input a common game pad (Xbox360® controller) shall be used which is connected via USB to a laptop running 64bit Debian GNU/Linux. On this computer a client application shall be executed which both retrieves control signals from the game pad and holds the data link to the server application. The latter is executed for simplicity reasons on the low-cost development platform Beaglebone Black which also runs Debian GNU/Linux as operating system. Representing an operational machine a simple electronic circuit with an AVR microcontroller, an LED and USB connectivity is attached to the Beaglebone Black. It is to demonstrate reactions to user inputs with the game pad. The following figure gives an overview of the scenario just described.

The software both for the client and the server application shall be developed in Ada because the Ada toolchain could easily be installed both on the x86 x64 (laptop) and the ARM (Beaglebone Black) system.

3. Realization of the Concept

In the following the realization of the concept is described:

In this realization a network connection is set up as the arbitrary data link between client and server because, with the nowadays ubiquitous internet, arbitrary distances can be covered easily.

On client side user control inputs with the game pad are retrieved and forwarded to the server application via the network data link. Furthermore the client displays control signals in a user interface. It works as a fallback system and is able to replace the game pad in case the latter is not recognized by the x86_x64 system. The consequence of these functionalities is a parallel execution of three tasks handling the data connection (environment task), input events from the game pad (controller task) and user interface (ui task). The application is terminated as soon as the user interface is closed. A functional description of this tasking as well as the corresponding sequence diagram is shown in Figure 2.

At the beginning of the client/environment task the connection to the server application is established.

A similar sequence is applicable for the ui task. However instead of opening a connection, the event system is initialized. Additionally, while checking for user inputs, it is checked for program termination. These events are forwarded to the environment task. Figure 4 displays the interaction of the three tasks in a sequence diagram.

Figure 5: Program sequence of the server

4. Display of the Demonstrator

A demonstration of the hardware and software setup shows the following short video sequence:

• one Xbox360® from the Microsoft (see https://www.xbox.com for details)

• one simple electronic circuit with an Atmega328 AVR microcontroller, an LED for displaying user interaction and USB connectivity

• Glade 3.20.0 for designing the user interface

• a LaTeX typesetting system for writing this documentation