Repeat the random pattern correctly and you receive a Jolly Rancher.

Repeat the random pattern correctly and you receive a Jolly Rancher. 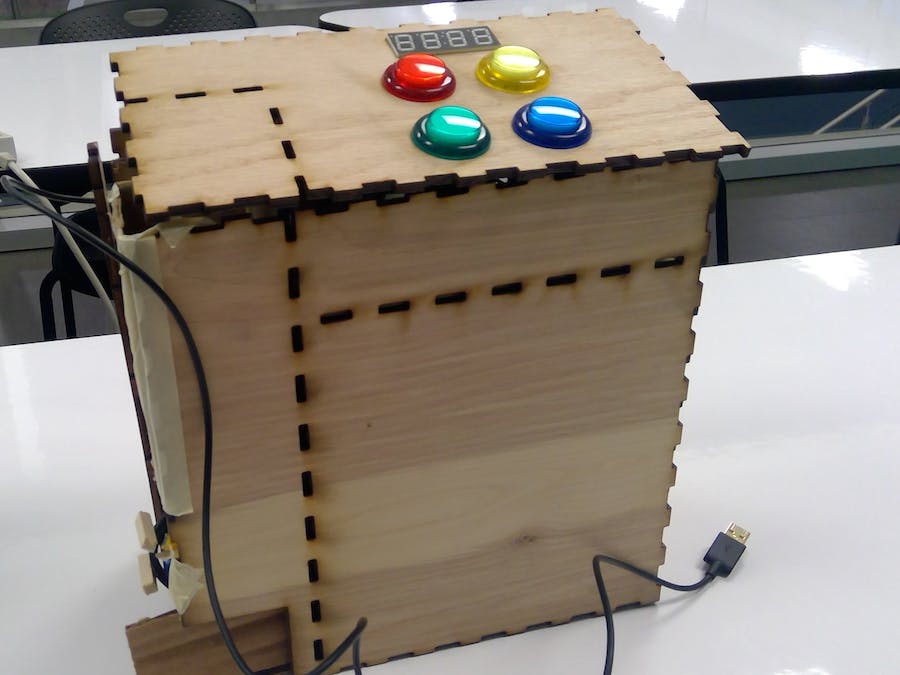 There are 4 LED buttons of different colors on the top of the box. When the green button is pushed, the game starts. For the initial level, a random pattern of 7 LED buttons light up. The user then repeats the pattern by pressing the buttons in order. If the user is correct, the servo motor spins and releases a piece of candy, in this case a Jolly Rancher, from the box. For the next 20 minutes the difficulty level is increased. For the first five minutes, 15 LEDs light up. For the next 5 minutes, 13 LEDs light up. For the following 5 minutes, 11 LEDs light up. For the last five minutes, 9 LEDs light up. The difficulty then returns to the default state. This is to make it harder for someone to continually win the game and receive multiple pieces of candy in a short time frame. The other part of this is if the user incorrectly repeats the pattern the buzzer sounds and they are locked out of playing for the next 20 minutes. Below are videos showing the functions of the final candy game box.

There were three major parts to this project. The first was the coding, the second was the wiring, and the third was designing and building the box and its mechanisms. All the code used and more information about it can be found following this link: Github Files. The final game code is also farther down this page.

The last part was making the box and the mechanism to release the candy. I started with making a mechanism that worked. The servomotor came with a wheel that could attach to it. I cut a square wood dowel into 8 pieces. I then superglued these pieces evenly apart on the wheel. This allows the candy to sit between the two pieces and roll out when the motor turns. The picture of this is below.

After confirming that the motor would move the candy with some tests, I started creating the CAD files for the box. All the files are farther down this page. The main challenge with this was creating the correct size and spacing for the tabs. After I felt satisfied with the CAD files, I converted them to Adobe Illustrator and laser cut them. The laser can be seen cutting the wood in the picture below.

After laser cutting the box, it was time to put it together. The box has some issues with the fit between pieces, so it is not fully connected currently. The pieces are all being held together, but not all of them are connected with their tab joints. The overall shape and size can be seen in the photo below. The box has three compartments: candy dispensing area, circuit holder, and storage.

The candy dispensing area had a built in hole in the front plate for the candy to come out of, but it is currently too small. The mechanism was moved to the side of the same compartment. The side the candy is coming out of now is meant to have a removable wood piece for fixing and loading. A rectangular chute holds the Jolly Ranchers, while the fall onto the spinning wheel. The chute is just slightly bigger than the candy to prevent jams from multiple pieces trying to go into the area.

The next section is the storage on back. When making the CAD files, I realized there would be a lot of wasted space in the box, so I made it storage. This allows refills of candy to be kept with the box. Having the opening on the back, keeps the storage unit out of the way and less accessible. The two quarter circle holes are used for moving the door. The hinge was attached to keep the door piece attached to the back.

The final section houses the Pocket Beagle and all the wiring. This section is directly underneath the top lid, since that is where the LED buttons and display are located. The buzzer is not on the top piece, since it can be heard through the wood and does not need to be seen. The platform could be slightly lower to give more room for all the jumper cables. The inside of this section with everything present is below.

Other Considerations and Comments