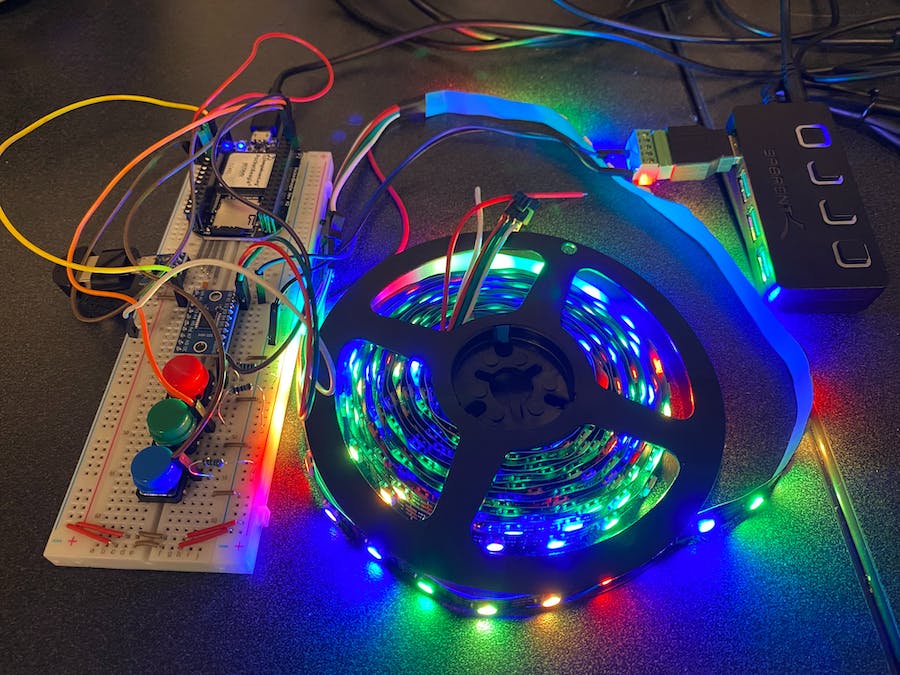 This is a project for my ENGI 301: Introduction to Practical Electrical Engineering class at Rice University.

LED light strips are a popular way to liven up a dull dorm room. My room currently has some installed and are controlled by a small remote. However, I frequently lose my remote, hindering my ability to turn on my LEDs. Being able to turn on and off my LEDs from anywhere around my room by just clapping would remove the need for a remote and save time. Additionally, most LED strips I've seen are only able to uniformly display one color at a time. The LEDs in my LED strip are able to be individually coded, meaning they will be able to display multiple colors in different patterns at once. This design features a unique clap-on clap-off mechanism, as well as a warm colors, cool colors, and rainbow LED color pattern setting. These features will contribute to a unique user experience that I have not seen with LED lights that I have previously owned.

A Fritzing diagram of the overall circuit of this device is shown below:

The three push buttons will be used to switch between the three color pattern settings. They must be inserted in the middle of the breadboard so that the plastic nubs on the bottom fit into the groove at the center of the breadboard. A 1k Ohm resistor should be connected to the "+" power bus and one of the button terminals. A jumper wire should also be connected between the resistor and same button terminal to a GPIO pin on the Pocketbeagle. The other button terminal should be grounded by connecting it to the "-" rail of the breadboard using a jumper wire. Repeat the same steps for the other two buttons. I used P2_2, P2_4, and P2_6 for my GPIO pins.

Using jumper cables the LED strip can also be connected to the level shifter.

To set up the usb microphone, first run these sets of commands in Cloud9.

Once ran, make note of the device number and card number. Then run command:

You should see in the terminal pcm "hw:#, #" The first number should correspond to your card number, followed by your device number. If they do not match, edit the text accordingly. Once this is complete, your microphone should now be set up.

For the LED strip, first download and put the following files into a directory

Note that configure_pins.sh, run, run-opc-server, opc-server must be given permissions 755. This can be done by running:

You can check if this successfully worked by running command ls -l and checking to see if the files are highlighted green.

Also, the following PRU files must be in a subdirectory pru/bin/

We then must the following command to edit uENv.txt:

Once the textbox appears, comment out the RPROC firmware and uncomment the UIO firmware.

Once that is complete run commands sudo reboot and ls /sys/class/uio to check that UIO is available.

Brief overview of what the code is supposed to do:

This code should first connect the client to the server. It should then turn off all LED lights initially. Afterwards, it will then prompt the microphone to begin continuously collecting input data. Once a certain noise threshold from the environment is passed and power is on, the LED strip will turn on all white. If this threshold is passed while the LEDs are on, it will turn off all of the LEDs. When the LEDs are turned on, the user can press on the buttons to change the color settings of the LEDs. The three settings are warm colors, cool colors, and rainbow. The code is formatted so that unless the LEDs are first turned on by a clap, it will not turn on even when the buttons are pressed. Once it recognizes that a certain button is pressed while the lights are on, the color settings corresponding to that button are sent into the LEDs and are kept at that setting. The color setting functions are threaded so that the user can switch between settings at any time while the LEDs are on.

I will now go through some components of the code and the development process behind it.

I decided to use the Python module sounddevice to obtain sound level data from my microphone. My sounddevice code is largely based off of code I found on StackOverflow linked here. This code opens a stream, where sound data can be continuously gathered by the microphone. This stream is usually created by function sd.Stream, however, I ran into many issues with it recognizing the number of channels I needed for the stream. This issue was resolved by using the sd.InputStream function instead shown below. I had realized that the Stream function requires both an input and output. In my case, since I only require an input from the microphone, the InputStream function was used instead.

Once the stream has started, the sound data is then displayed as lines in the terminal, so that we are able to easily visually see the sound level that is going through the microphone. The more lines there are in the terminal, the louder the input sound is. I used this information to create a sound level threshold so that my LED lights would run after this sound threshold was passed through clapping.

When I first created the buttons, I had to program them so that the buttons were able to be switched between at anytime while the LEDs were on. This means that I needed all three color setting defs to be continuously running at the same time. This led to me using threads. By creating a thread of buttons, I was able to have all three color settings able to freely be alternated between.

Something I was not able to get to work was the auto-start on boot. I tried using "cron" to have my program start running right when the Pocketbeagle was booted. This was attempted by using command:

Once the textbox came up, I then entered the following commands into the terminal:

However, this was not successful. I had errors in the cronlog from the sounddevice module not being able to properly recognize my device. More troubleshooting is required to get the auto-start component to work properly.

First plug the USB hub into an outlet. Make sure you press the button on the USB hub to send power to your LED light strip. A micro USB to USB A cable should be used to connect the Pocketbeagle to your laptop.

Two terminals must be used to run the code. The command

should be entered into the first terminal to run the server. Then, the command

Overall, making this project was a challenging yet rewarding experience. I greatly underestimated the complexity of the software component of this project and there was a steep learning curve that I had to get over. However, once I started able to get components of the device working, it was very satisfying and made the effort worth it. The trickiest part of making this device was probably the sound level component, because a lot of the Python modules like pyaudio and wave did not recognize my microphone for some reason, hindering my ability to use them. I'd like to give special thanks to my professor Erik Welsh, for giving so much time into helping me out with this project. Without his help, I could not have completed this project.

Some future steps for this device include: 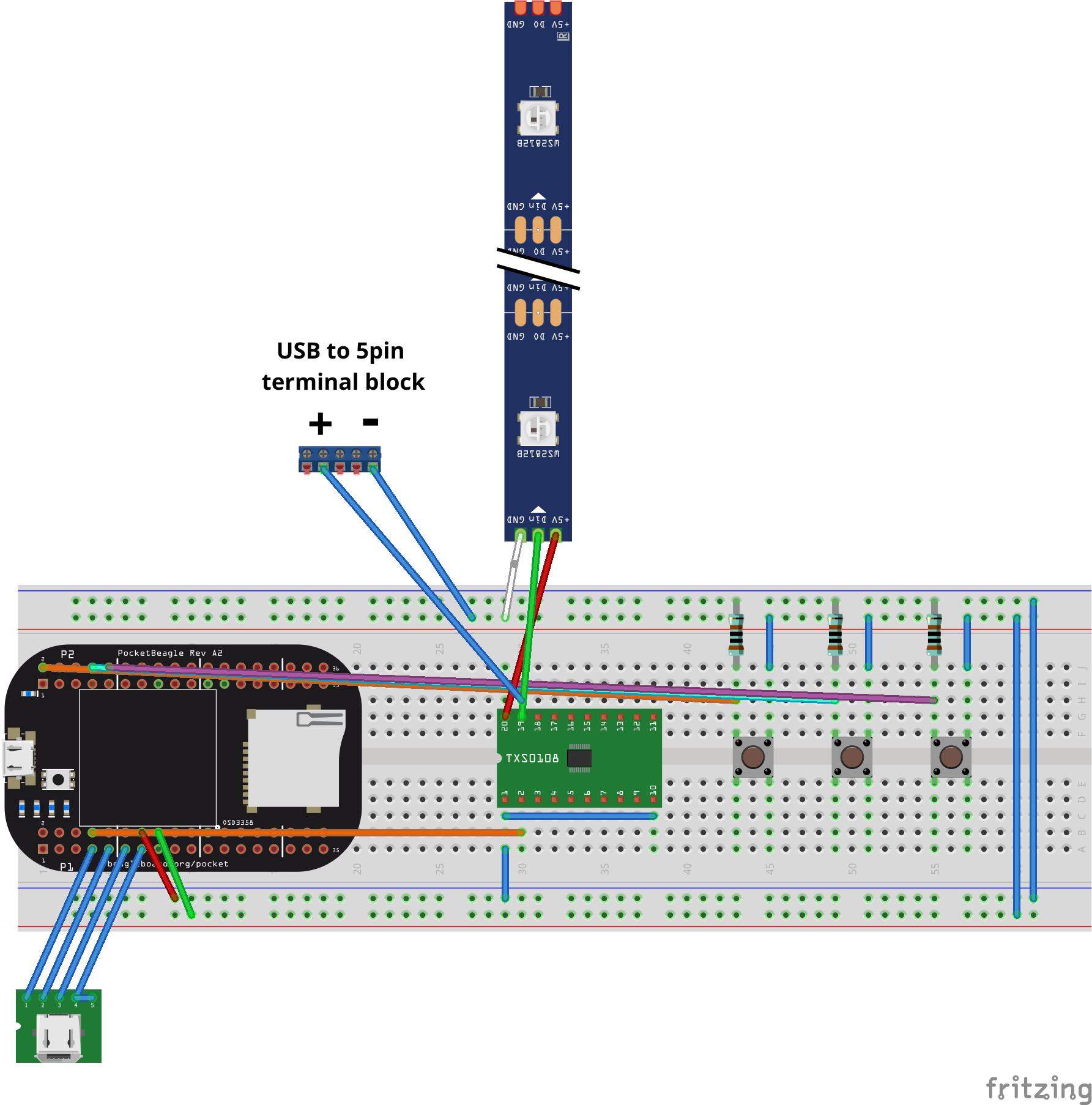