Do you want to use BeagleBone capes with Android? Here is how to get started.

Android on the BeagleBone Black with the 3.8 Linux Kernel

Android on the BeagleBone Black with the 3.8 Linux Kernel

Do you want to use BeagleBone capes with Android? Here is how to get started. 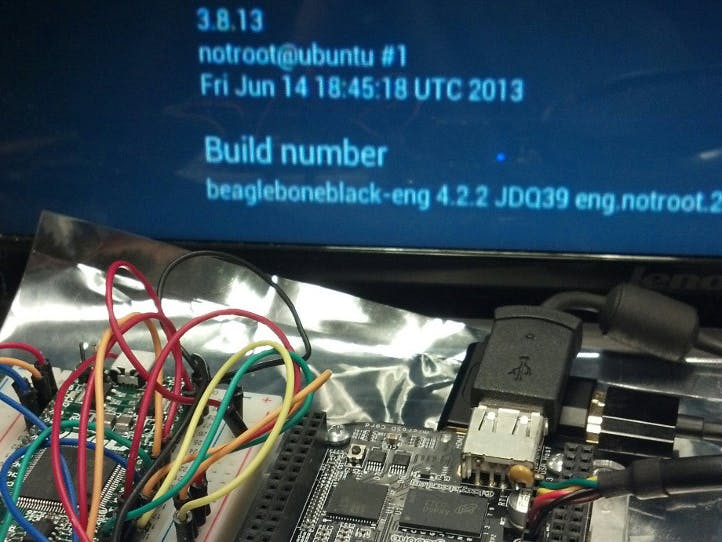 The BeagleBone Black hardware platform is well suited to acting as a prototying platform and learning tool for exploring the Android OS. The Rowboat project currently has support for building Android for the BBB, but there is a problem: Rowboat builds Android for a 3.2 Linux kernel, and the BBB uses a 3.8 Linux kernel. This means that the following limitations are present in the Rowboat build:

After a lot of research and tinkering, I've managed to build Android with a 3.8 Linux kernel. This page will give an overview of the process and (hopefully) help you in creating your own Android builds for the BBB.

Before we get started, you might like to try a pre-built image of Android for the BBB that I have already made. You can download it here (about 700 MB in size), decompress it with bunzip2, and dd it onto a microSD card of at least 4 GB in size. Put the microSD card into your BBB, power it on, and Android will boot and come up. Use a USB mouse (and a USB keyboard, too, if you'd like) connected to the BBB's host USB port to interact with the system. Audio and video will be sent over the HDMI connection.

The CircuitCo wiki has step-by-step instructions for installing this pre-built image. The first boot of your Android system using the image will take about three minutes, since there is some "first time" system setup that takes place. On subsequent boots, it will only take about a minute before you are up and running.