Tracks and records the speed at which a golf ball falls into the hole. Provides audio and visual feedback. Also has a history display mode.

Tracks and records the speed at which a golf ball falls into the hole. Provides audio and visual feedback. Also has a history display mode. 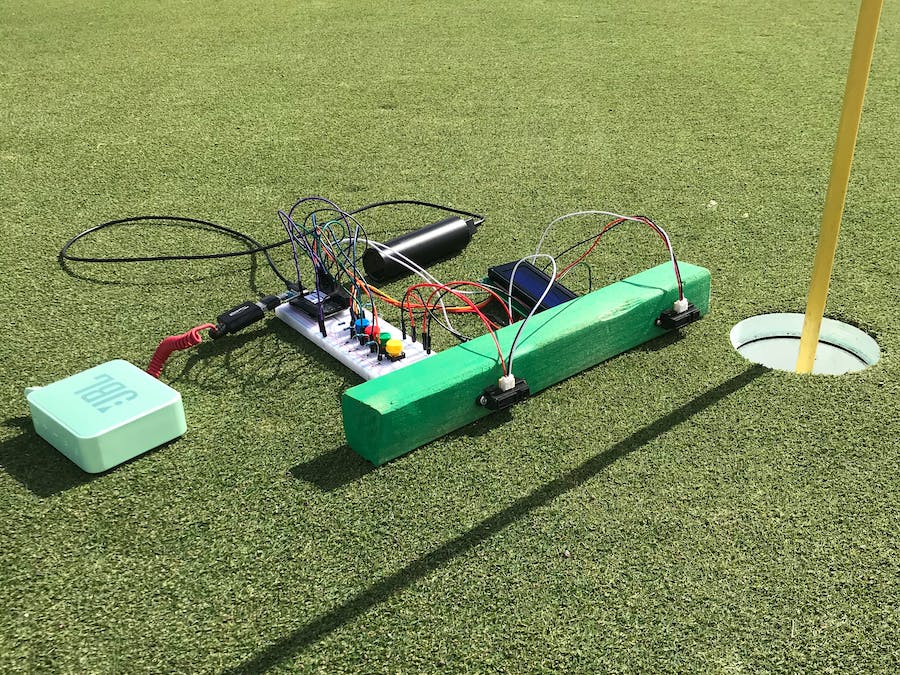 All golfers know that practicing putting can get a little boring and it is easy to lose focus. Additionally, it is common knowledge that the speed of a putt is much more important than the direction of the putt. Therefore, I decided to create a putting aid that is fun, interactive, and will help you dial in your speeds on the green.

I spent some time reading up on various golf science articles that discuss the optimal speed at which a ball should enter the hole. I found that a ball entering the hole at around 70 cm/s will accurately hold the line of the putt and stop approximately 1-2 ft behind the hole if the putt misses the cup. Moreover, this tool registers putts rolling between 60-80 cm/s as the ball enters the hole as a perfect putt. Putts rolling faster than 80 cm/s are read as too fast, and putts rolling slower than 60 cm/s are read as too slow.

In order to successfully use this putting aid, the apparatus should be placed along the line of the desired putt just to the left of the cup on the putting surface. This tool works best for level, straight putts that are between 4-10 ft from the hole. The PocketBeagle must be supplied with a 5V of power. The program takes 30 seconds to boot up upon supplying the power. The yellow button can be pressed to begin recording putt speeds. The user must wait for the audio queue, “Ready for putt” before hitting each putt. The tool will record the speed of each putt, display it on the screen, and provide audio feedback based on the speed of the roll. This functionality is shown in the video below.

Additionally, if the user presses the green button on the breadboard, the LCD screen will display the putt speed history, with the first putt recorded as #1 on the list. The red and blue buttons can be used to toggle up and down on the list. All putt speeds are in cm/s. The yellow button can be pressed again to switch the mode back to recording putts. This operation is shown in the video below.

Press the power button on the PocketBeagle to turn off the device.

The first program functionality I attempted to tackle was the audio. I decided to use aplay, an audio file player for the ALSA sound card driver. I downloaded the player with the code below.

I used a generic online .wav file recorder to record the various audio files I wanted to integrate into the project. I simply downloaded those files into the PocketBeagle’s file directory. The .asoundrc file and asound.conf file needed to be altered slightly in order for the aplay function to work. The default speaker system had to be changed by pasting the code below into both files.

I had to comment out the original default in the asound.conf file. In order to actuate these audio files within the program, the os function must be imported and utilized. The format of this is shown below.

The next portion of the project that I completed was wiring up and confirming the functionality of the 2 IR Distance Sensors. Both sensors are supplied 5V of power and operate as GPIO inputs. The first sensor is connected to pin P2_04 (gpio58) and the second sensor is connected to pin P2_06 (gpio57). I first tested their functionality by checking their input values, making sure they changed from 0 to 1 when something was placed in front of each sensor. I then decided on the distance that I wanted the sensors to be from each other, 17.75 cm, so I could complete the speed calculations in the code. The time at which the first sensor is activated is recorded, then the time at which the second sensor is activated is recorded. Then the speed calculation is performed and the LCD display shows the speed of the putt and the speaker plays the audio clip associated with the speed range of each putt.

After completing the sensor set up, I decided to work on the display function of the device. I decided to solder an I2C onto the 20x4 Character LCD Display in order to simplify the wiring.

Next, I downloaded the Adafruit character LCD library using the command-line code below.

The code below helps to initialize the LCD screen and simplify the necessary code for achieving desired display functionalities.

I had to adjust the contrast of the screen on the I2C backpack in order for the text to be visible on the display.

I then integrated simple display commands into my code to allow the screen to show the speed of individual putts in real time, reset to the "Ready" screen before each putt, and display the history list of all recorded putts. These functions are depicted in the videos above.

The code consists of three files: the main code, a run script, and a configure pins file. The main program defines three functions: a record function, print history function, and toggle history function. These functions consist of while loops that contain numerous if statements that wait for certain events, ie. button presses or sensor activations. The program culminates into a main while loop that again, waits for certain button presses to call the various functions, yellow button press to initiate the record function and a green button press to display the history.

This project was super fun to make! The code is pretty straight forward and concise and the device works super well. I look forward to playing around with the audio files and maybe having the speaker crack certain jokes depending on speed of the putt. Thank you Professor Welsh for helping me along the way and showing me how fun Python and embedded systems can be! I look forward to continuing to use Python and pursue projects like this outside of the classroom. 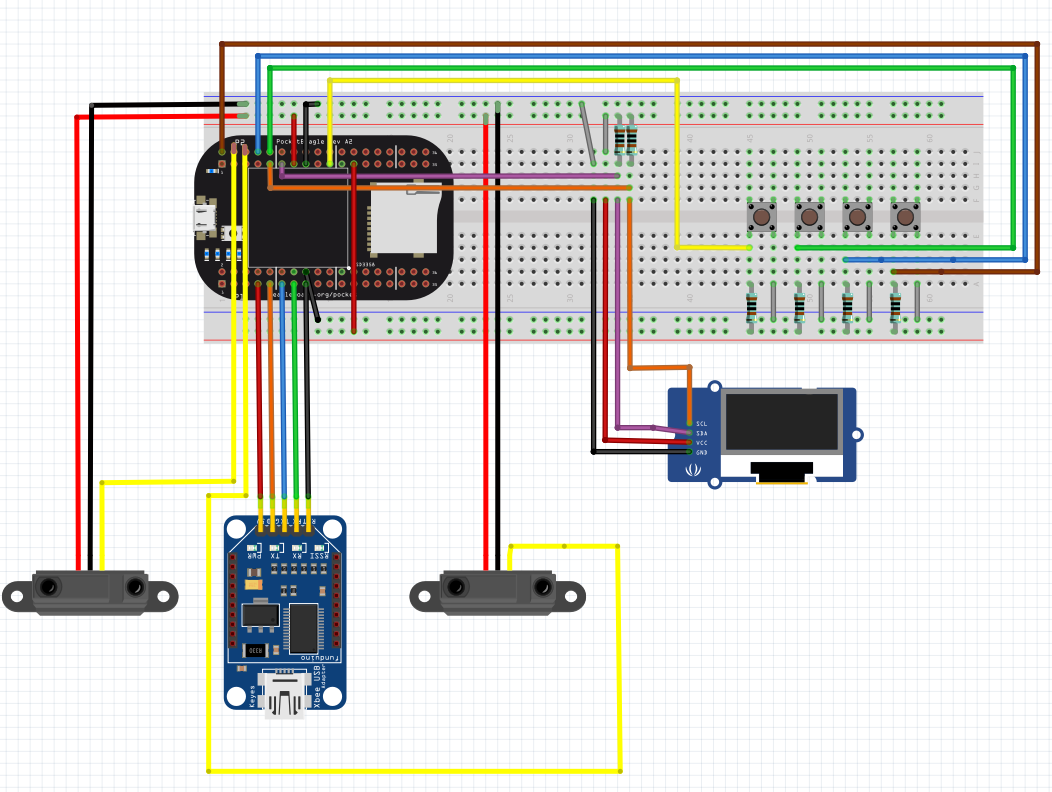