This will walk you through how to use the PCB Ruler to measure things that are longer than the maximum measuring capacity of the ruler.

This will walk you through how to use the PCB Ruler to measure things that are longer than the maximum measuring capacity of the ruler. 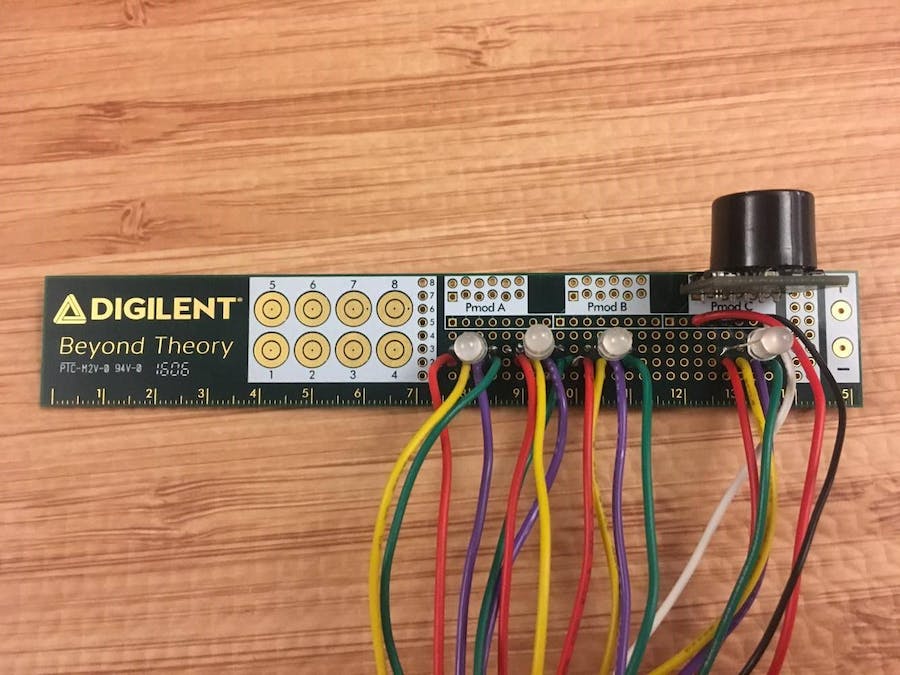 This tutorial will walk you through how to use the PCB Ruler to measure things that are longer than the maximum measuring capacity of the ruler (6 in) using sonar technology and RGB LEDS.

Below is list of materials used in this project:

The PmodMAXSONAR is a ultrasonic range finder with effective detection range of ~6 in - 255 in. It's capable of reading measurements three ways at once - through UART, analog and PWM. In this project I use only the analog feature to record distance measurements.

Each RGB LED has four legs, follow the picture above to determine which leg is which, but the idea is one leg controls the red LED, then blue, green, and a fourth leg for PWM control.

Solder the LEDs in place. I put three relatively close to one another and the one I wanted as my 10x multiplier I offset a little bit from the rest. I chose wires that matched the LED color for each diode, and soldered those in place.

Solder in the wires to the Pmod and that's it for the circuit. I cut the wires all to the same length (about an arms length) - because they'll be plugged into the BeagleBone Black, longer wires will prevent any annoying or harmful tug while using the ruler.

I used two ~3 inch long pieces of heat shrink to keep everything neat. One piece towards the ruler and one towards the other end of the wires.

Using LabVIEW 2014 and LINX 3.0, I can target the BeagleBone Black. If you're unfamiliar with LINX 3.0 or need help doing the firmware installation on your BeagleBone, these tutorial videos walk you through the entire process.

Although the PmodMAXSONAR has its own set of VI's through LINX 3.0, we won't use them this time. All we have to do is read from the analog output on the Pmod.

Each diode on the RGB LEDs requires its own digital output. The PWM control for each LED also requires its own PMW channel coming from the BeagleBone. I have the channels set as constant in the block diagram, but you can change those if you decide to switch the LED digital or PWM channels.

For every inch the MAXSONAR sees past 6, it will light up the first diode in the first LED (red), then the second diode in the first LED (green) for the next inch, etc. This will cycle through for however far the object you're trying to measure is. Once all three LEDs cycle through the fourth LED will illuminate red - this LED acts as a 10x multiplier for each of the subsequent LED colors.

Thank you for viewing my tutorial and please feel free to comment below or message me with any questions.