A guide to creating a simple guitar tuner in standard tuning.

A guide to creating a simple guitar tuner in standard tuning. 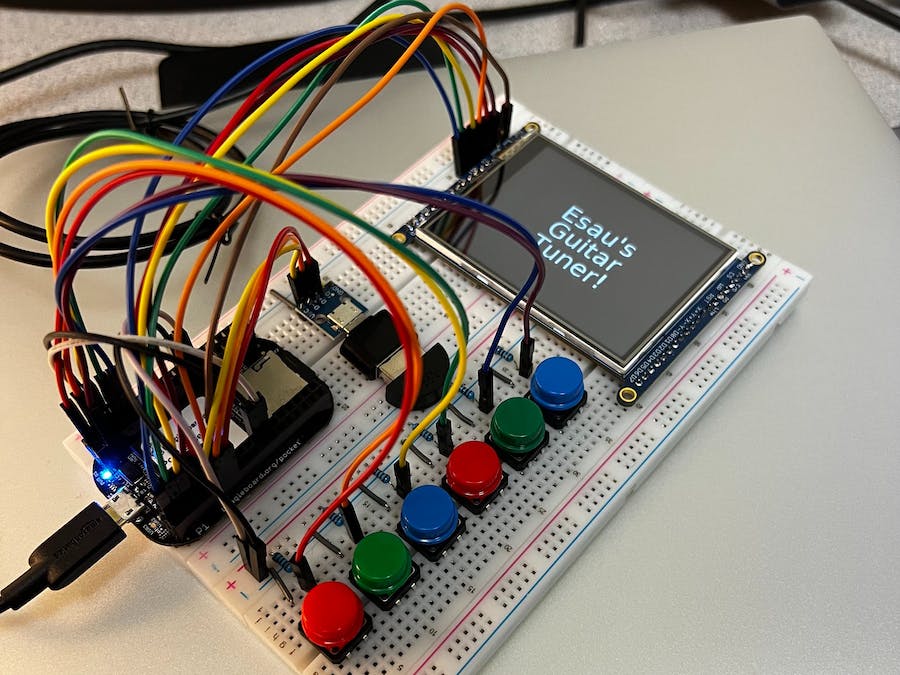 Background of the Project -

Pretty much all of my life, I've had a huge passion for music. I've played piano from a pretty young age and I have recently begun learning how to play guitar, so when I was tasked with creating an embedded system in my engineering class, it was only natural that I made it about music.

The project I chose to create was a simple guitar tuner. It uses a mini USB microphone to record a small audio clip of a string being played. It then converts the audio file to a frequency value using an FFT. Lastly, the frequency value of the converted audio clip is compared to the 'target' frequency of the corresponding string and feedback is given based on whether the string is in tune or the note is flat/sharp. This feedback is in the form of text on an LCD screen.

After collecting all the needed hardware components, the first step should be unpack the LCD screen and solder on the pins provided with the packaging. If there aren't enough pins to fill both sides of the board completely, make sure to prioritize the 8 SPI pins the device requires: GND, Vin, CLK, MISO, MOSI, CS, D/C, and RST. After completing this, the assembly begins (for which the fritzing diagram included below will be needed).

The two breadboards that have been gathered should be snapped together to form a single large breadboard. This is not necessary, but it makes for a much more stable device. After doing this, you can place the PocketBeagle as shown on the fritzing diagram, with "P1_1" lining up with pin a1 on the breadboard.

The buttons, represented by yellow jumper wires, should be installed exactly as seen on the fritzing diagram.

The code is available at the Github repository referenced below.

After completing the build and downloading the code from Github, you are finally able to use the guitar tuner! The process of using the device is simple -

Video of How the Device Works -

Below you will see three videos of the device being used, which show the three possible outcomes of running a test for one of the strings. In each of the videos, the top button (which corresponds to the low E string) is used to commence the recording of the sound.

A huge thanks goes to my professor Erik Welsh who guided me throughout the process of creating this device and who also provided the display code used in this project. Listed below are additional sources that were used in the creation of this guitar tuner -