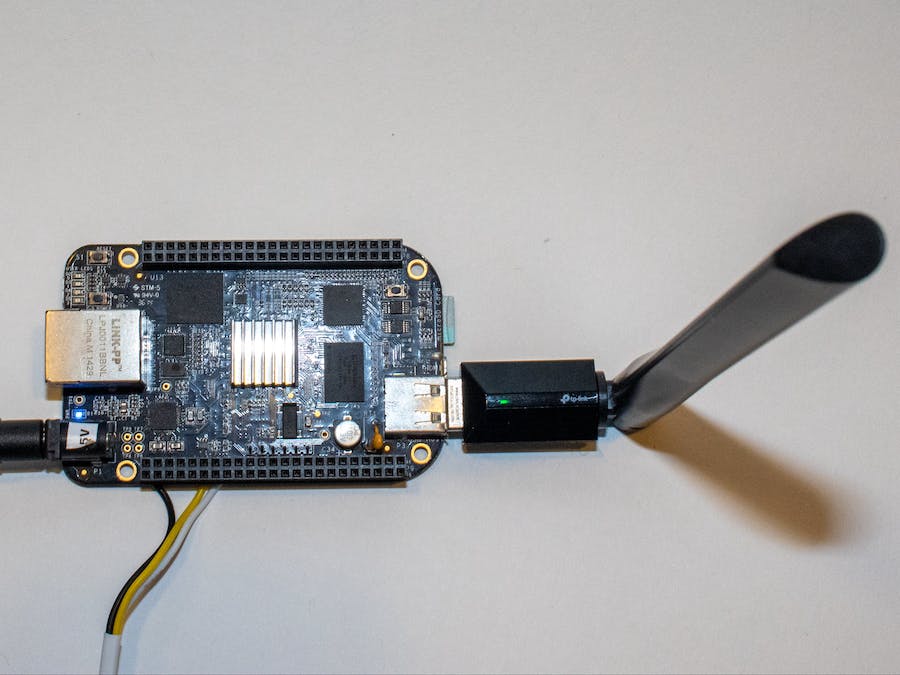 The original BeagleBone Black doesn’t have integrated Wi-Fi capability included. There are a couple of options to provide the board with wireless internet capability. One is to connect it to a bridge repeater (which is a device with the same construct as a wireless network router), as show in Figure 1, that is battery powered to let the BBB be mobile for projects were mobility is required. The downside of this solution is that that it is very bulky, expensive and consumes significant amounts of power. Another method is to purchase a USB Wi-Fi Card that works out of the box with Debian in the BBB. This option is excellent when internet speed and bandwidth is not a priority, it also a low cost. The downside with this solution is that the signal reception and transmission is very weak and, in my experience, not very reliable, it also takes up a USB port, which can be solved by adding an externally powered USB Hub. The last option is using a USB Wi-Fi adapter meant to have good transmission and reception power (with a high-gain antenna) as shown in Figure 2, the advantage on this device is that it gets a stable connection and is relatively low priced. One of the major disadvantages is that there are no drivers on the BeagleBone’s Debian version right out of the box (and many other Linux distributions), therefore, they need to be downloaded and compiled (if you can find open-sourced drivers).

What materials are needed?

To follow this guide successfully it’s assumed that the following list have been gathered/followed prior to starting.

For all the commands that will be run on the BBB terminal, a quick explanation of what the command does or a side note can be given before or after the command. For example:

Don’t expect to be commanded to “type” or “enter” before the command.

What Can I Do?

3. Go to the folder where BBB scripts are located

Figure 3: This shows the terminal's appearance after updating the "/tools" directory

This command will run the script to update the kernel. Enter the password if you are asked to

These are the steps needed to be done before compiling and installing the adapter’s drivers in the BBB. In this section we make sure that the BBB has all the required software installed such as the kernel’s header files, compiler, framework and a version control system need to download the source code from its repository.

This command will install the current Linux-headers. These headers will be needed if you are compiling software that use functions that the Linux kernel provides.

This command installs a basic calculator needed by the source code.

Build-essential is a “meta-package” that will install programs needed to compile C/C++ programs such as GNU C compiler, etc.

dkms is a framework that enables generating Linux kernel modules

Git is a version control system, it lets you download files from GitHub in this document (and other functions that we won’t be using in this guide).

Note: It excludes the Linux-Headers

Figure 5: Installing more than one app in a single command

In this step we will be downloading the source files of the Wi-Fi adapter driver. Instructions to compile the drivers for different systems are included in a file named README, this guide is based on that file. There is a file named “Makefile” that contains the instructions for the compiler on how to build the code. The maintainers of this source code in GitHub have included flags in the Makefile to choose the target machine that it’s being built for, for example, you can change the flag of “CONFIG_PLATFORM_I386_PC” from “n” to “y” to tell the compiler to build executable code for an Intel x86 compatible processor. The BBB is not in the list of platforms, but there is one for the 32-bit Raspberry Pi, which runs in an ARM processor just like the BBB, and the endianness and other settings are the same, so we can select the “CONFIG_PLATFORM_ARM_RPI” as the flag for the BBB and it will work.

Command creates a directory to hold the downloaded driver, I will call mine “wifi_driver”.

3. Get the source code using git

5. Modify the Makefile in order to build for the BBB

5a. Open and modify Makefile

Figure 6: This is the area of the Makefile that we are looking for, it's labeled "Platform Related"

Figure 7: Platform flags with the correct value to build for the BBB (and Raspberry Pi)

The above installation will take a few minutes (around 25). This file automatically runs the “make” command and prints messages to the console to make the installation more “human interactive”

6b. After it finishes compiling and installing, it will ask if you want to edit the driver options, you may click “n” for no.

6c. You will be asked if you want to reboot, type “y” and then “enter” if you are not prompted. Type: “sudo reboot”

7. Now you may connect the Wi-Fi card to the USB port, make sure your BBB is connected to the 5V barrel connector with at least 1A of current

Connmanctl is a utility that facilitates the connection to a wireless network in an easy manner.

2. Enable the Wi-Fi function on the beaglebone

You might get an error that the Wi-Fi is already enabled, this is fine.

3. Scan for Wi-Fi to see whatconnections are available

Wait until Connmanctl it says that it has completed.

4. List all networks that were found by the previous command

The "services" command shows the list of the scanned networks.

6. Connect to your network

7. You will be asked for a passphrase, type it

Figure 11: This is where you type the password of your Wi-Fi connection

8. To verify that the previous steps worked, the command "services" is needed

You should see “*A0” or “*AR” next to the desired Wi-Fi connection.

10. Check the information about network connections by using "ifconfig"

Shut down the BBB and disconnect the Ethernet cable if that’s how you are connecting into the board.

13. Turn on the BBB with the USB Wi-Fi card connected

It might take longer than before to boot up. Remote in with the IP address gathered in Step 11. If it doesn’t connect, go to this guide: https://www.hackster.io/ederfernandotorres3/setup-beaglebone-black-with-device-tree-overlays-9e0ded. And go to section where it explains how to use IP Scanner to find the new IP address of the BBB

The above command tests if the BBB can connect to the internet by sending/receiving packages to/from google.com.

Figure 13: Successful connection to google.com shows how many packages were received

15. Press “CTRL” and “c” on your keyboard to stop pinging google.com

This guide can be used to give the BBB Wi-Fi capabilities. This can facilitate in projects where a wired connection does not work, and the bulky solution of a bridge repeater is not an option, or it might be too expensive. This solution can be used on mobile robots or sensor nodes that are apart from the router. The bandwidth of this solution is good to send video feed in HD (or smaller resolution for a more resilient connection).

2 projects • 0 followers
I've been working on embedded systems since 2012 to create workshops for our IEEE student branch at the University where I obtained a BSEE.
ContactContact