Play your favorite PC games on Raspberry Pi (or any ARM) - Might and Magic 6, Stronghold Crusader, Pharaoh and Cleopatra and more.

Play your favorite PC games on Raspberry Pi (or any ARM) - Might and Magic 6, Stronghold Crusader, Pharaoh and Cleopatra and more. 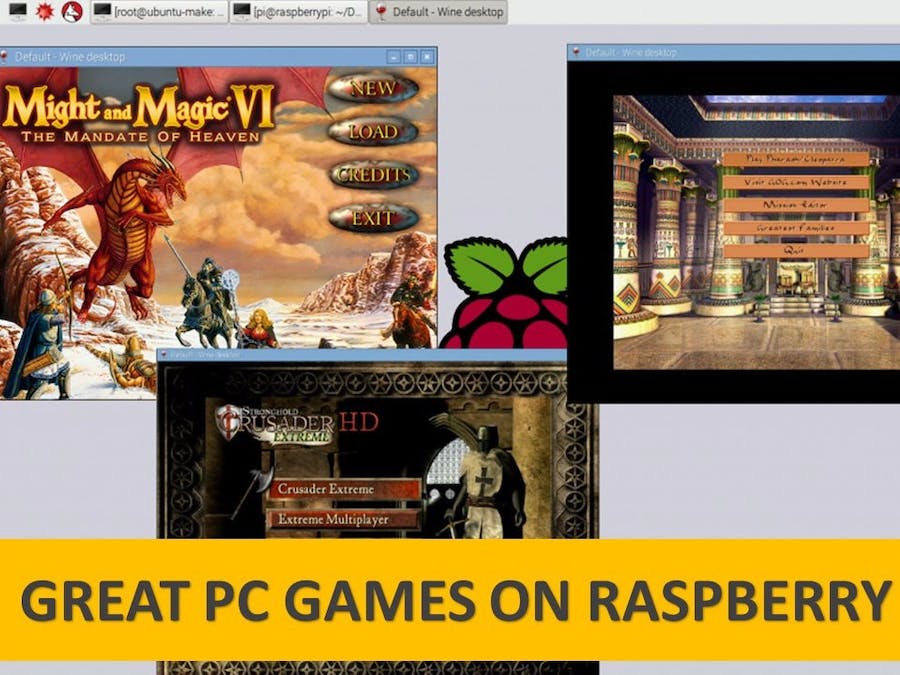 In one of our previous articles we told you about the ways of playing your favorite games on Raspberry Pi. And if you’ve read it, you already know that most of the ways allow you to play only very old games. But if you’d like to install some more modern PC games, you will face inevitable troubles. Luckily, there is a simple and convenient way out – ExaGear Desktop. In this case it will work as an emulator and will allow you to play Linux and Windows PC games on your Raspberry Pi.

We already posted 2 tutorials on how to use ExaGear Desktop as a gaming emulator and run some iconic games – Arcanum, Disciples II, Fallout and Heroes of Might and Magic 3, Sid Meier’s Alpha Centauri and Caesar 3 – on Raspberry Pi. However, we continue testing more games and sharing the info with you.

So in today’s post we will tell you how to use ExaGear Desktop as Might and Magic 6, Stronghold Crusader Extreme HD and Pharaoh and Cleopatra emulator for your Raspberry Pi.

P.S.: keen gamers will probably also like to know that with ExaGear Desktop you can turn your Raspberry Pi into a TeamSpeak 3 Server

First of all we need to install Exagear Desktop on Raspberry Pi.

2. Install and activate ExaGear on your Raspberry Pi by running install-exagear.sh script in the directory with deb packages and one license key:

Now you can launch the guest x86 system on your ARM device:

Check that you are in x86 environment by running the ‘arch’ command:

As we are going to launch Windows games, we need to install x86 Wine inside Exagear. This can be done easily:

6. After installing Wine we recommend to run winecfg:

and enable the “Emulate a virtual desktop” bar. Otherwise you can face issues when the application will try to switch to the full-screen mode.

Now all preparations are finished and you can proceed with installing and running PC games. Below we show some examples.

It’s possible to run a different kind of distros and installers, but in some cases you’ll need to do unobvious tricks to make it work. That’s why we recommend to use DRM-free versions of games from the GOG site, as this is the most straightforward  way to launch a game.

To install MaM 6 open Terminal (command line), enter the guest x86 system by running the ‘exagear’ command, enter the folder with the installer (in our case it’s  in folder Downloads) and run it with Wine:

The graphical interface of the game installer will show up:

After installation is finished you can run MaM 6 from your Desktop:

Wait a couple of minutes while MaM 6 is loading, and finally, you will see the start menu. Now you can play Might and Magic 6 on Raspberry Pi:

We recommend to download the game from from GOG.

To install Pharaoh and Cleopatra open Terminal (command line), enter the guest x86 system by running the ‘exagear’ command, enter the folder with the installer and run it with Wine:

The graphical interface of the game installer will show up and you can proceed with installation. After installation is finished you can run Pharaoh and Cleopatra directly from Raspbian desktop or from the start menu. You might need to wait until the game is loaded.

We recommend to download Stronghold Crusader Extreme HD from GOG.

To install the game on Raspberry Pi, just enter the guest x86 system by entering the ‘exagear’ command in Terminal, enter the folder with the installer and run it with Wine:

After installation you can run the game from Raspbian desktop:

Exagear Desktop can help you to significantly increase the capabilities of your Raspberry Pi-based gaming console by letting you run Linux and Windows PC games (such as Might and Magic 6, Stronghold Crusader Extreme HD, Pharaoh and Cleopatra, listed in this tutorial, and more games from our previous articles).

Don’t limit yourself – enjoy many more of your favorite games with ExaGear Desktop!