How to play Arcanum, Disciples II, Fallout and other Windows PC games on Raspberry Pi with the help of ExaGear Desktop.

How to play Arcanum, Disciples II, Fallout and other Windows PC games on Raspberry Pi with the help of ExaGear Desktop. 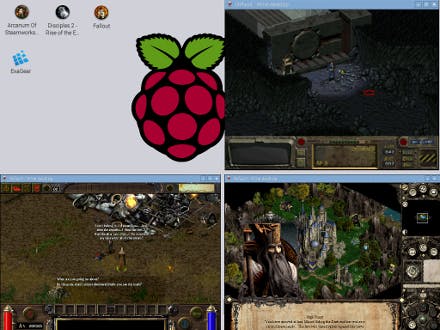 RetroPie is a very popular software among Raspberry Pi users. It enables players to run various old games on Raspberry Pi devices. For example, if you’d like to play some arcade games (such as Pacman or Galaxy) or our beloved console ones (by Dendy, Sega or Nintendo), you have to use some kind of emulators like MAME or EmulationStation to make it happen. In fact, RetroPie is such a kind of emulator tiered with open-source ported games in one package. But usually emulators have low performance. And in the case of x86 platform, you can mainly run only very old games. But fortunately, there is a better option.

Exagear Desktop can significantly increase the capabilities of your Raspberry Pi-based gaming console. You can play many more modern Linux and Windows PC games and move your gaming experience far beyond the RetroPie borders.

Today we’ll tell you how to run some iconic PC games – Arcanum, Disciples II and Fallout – on Raspberry Pi with Exagear Desktop.

First of all, we need to install Exagear Desktop on Raspberry Pi. The installation is very straightforward.

2. Install and activate ExaGear on your RPi by running install-exagear.sh script in the directory with deb packages and one license key:

Now you can launch the guest x86 system on your ARM device.

You can check that you are in x86 environment by running the arch command:

As we are going to launch Windows games, we need to install x86 Wine inside Exagear. This can be done easily.

6. After installing Wine we recommend to run winecfg :

And enable the “Emulate a virtual desktop” bar. Otherwise you may face issues when the application tries to switch to full-screen mode.

Now all preparations are finished and you can proceed with installing and running PC games. Below we present some useful examples.

It’s possible to run different kinds of distros and installers, but in some cases you need to do unobvious tricks to make it work. That’s why we recommend using DRM-free versions of games from the GOG site, as this is the most straightforward way to launch a game.

So let's break the RetroPie borders!

To install Arcanum just run the installer with Wine in Terminal (command line), and the graphical interface of the game installer will show up:

After installation is finished you can run Arcanum from your Desktop:

Wait a couple of minutes while Arcanum is loading, and finally, you will see the start menu.

To install Disciples II open Terminal, enter the guest x86 system by typing the exagear command and run the installer with Wine:

The graphical interface of the game installer will show up and you can proceed with installation. After installation is finished, you can run Disciples II directly from Raspbian Desktop. Wait until the game is loaded, then you will see the main menu:

To install Fallout on Raspberry Pi just enter the guest x86 system by using the exagear command and run the installer with Wine:

After installation, you can run Fallout from Raspbian Desktop. It’s better to skip the video at the beginning as it is a bit "laggy". But the game itself runs flawlessly.

Exagear Desktop allows you to run a lot of PC games on your Raspberry Pi. In this post, we only mentioned 3 of them. More games - Heroes of Might and Magic 3, Sid Meier’s Alpha Centauri and Caesar 3 – are waiting for you in Gaming Beyound Retro Pie. Part 2!